"Composers combine notes. That is all. How and in what form the things of the world are impressed upon their music is not for them to say." 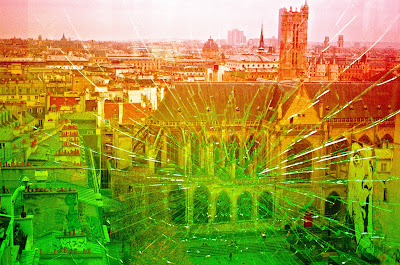 Thus spoke Igor Stravinsky when asked whether his "Symphony in Three Movements" was programmatic music.  I had to mention this quote when Nina told me after reading my previous blog post "La Vie En Rose" that she liked the pictures but that the captions were merely descriptions of how the images had come about.  She missed the philosophical deliberations of other posts (like "Parallel Universe"). 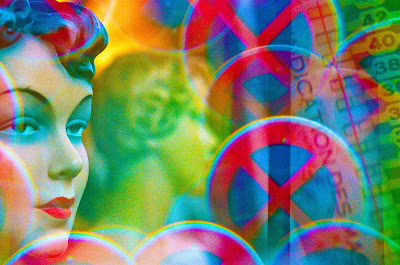 Do Stravinsky's words apply - mutatis mutandis - to photography as well?  Should I keep it to myself how and in what form the things of the world are impressed upon the "Images Of The Subconscious"?

The answer is yes!  I will stop explaining my pics right now  :-) 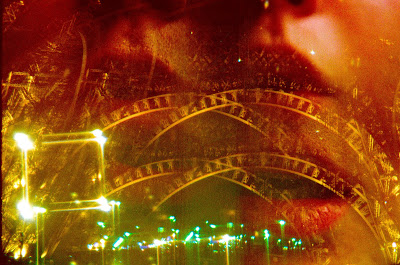 According to the entry in Wikipedia, four is "the natural number following 3 and preceding 5".  Phew - I knew that!!!  I also knew that 4 is a composite number.  I could have possibly guessed that it is an automorphic number.  But admittedly I did not know that 4 was also a Smith number and a Motzkin number.

Oh boy, there's so much out there to know... You could spend your whole day (and life!) just reading newspapers or watching the news and documentaries.  And still by evening you would most likely feel like Goethe's "Faust" who famously complained that despite having graduated in law, medicine and theology he was no wiser than before.  Or like Socrates who knew that he knew nothing. 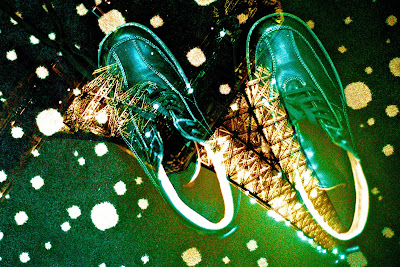 
Being around people who (other than Faust and Socrates) claim to "know a lot" is not always fun.  Countless times have I been faced with questions or comments like
- "You do not know when and where and of what Napoleon died?!?"
- "Come on Robert, it is general knowledge that Kazakhstan has a new capital!!!"
- "Did you not learn in school that the Hagia Sophia was originally a basilica?!?"

Unfortunately you can not impress many people with a profound knowledge of pop music, but in a perfect world I would have answered something like "Okay, admittedly I do not know these things, but I know that Stevie Wonder's song "Happy Birthday" is a social activist song from 1981 that was aimed at having the birthday of Martin Luther King, Jr. become a national holiday (=that holiday become a reality in 1986, it is on the 3rd Monday in January of each year and this year coincided with the inauguration of president Barack Obama on January 21, 2013).

I agree: Even this information might have just the same relevance - namely none at all! - for my every day life, such as knowing that a certain someone passed away 1821 in St. Helena because of stomach cancer (which would explain why in paintings he's always shown with his right hand under his shirt), that Astana succeeded Almaty in 1997 and that a formerly religious building is now a museum.

So let me come to the point: knowledge is very important, there can be no doubt about this.  Education must be a fundamental right for every woman and man, not least because it helps you better realise your potential and makes you more open minded (and thus happier?).  But do not despair if you cannot answer all the questions in a Trivial Pursuit game or a "Who Wants to Be a Millionaire?" TV show. 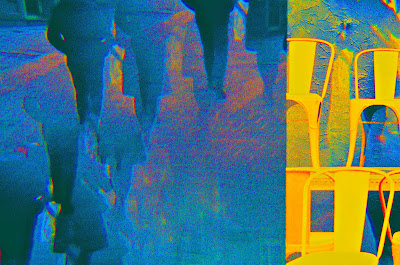 It might be more relevant for you to know that you have a skill which only few people on this planet have and which could even help solve some of the most pressing problems in this world and earn you money eventually.  Note that Sir Richard Branson's motto is "have fun, do good and the money will come".  Every one of us has unique skills, Richard Branson has them, I have them, and you have them as well.  In case you are not aware of them right now just think for a moment of the things that you really love doing and which you know you are good at.  Why be a passenger in your own life? Where your skills and the needs of the world intersect, that is where your might find your vocation! 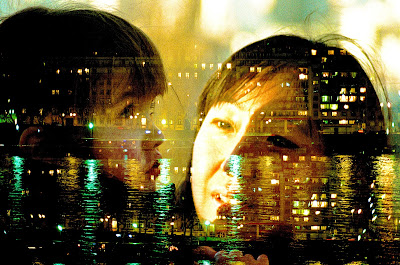 Let' s hope president Barack Obama also remembers this during his second term and that he uses his skills in order to help make this a better (and "greener"!) world for all of us, irrespective of our race, religion or sexual orientation. 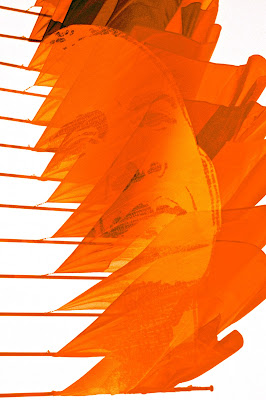 This Is My Tribute To A Man I Admire

Posted by Robert Marcus Klump at 10:30 AM No comments:

("When he takes me in his arms
He speaks to me in a low voice,
I see life as if it were rose-tinted")

Love is everywhere.  I dedicated my previous blog post to that magical feeling, Austrian filmmaker Michael Haneke's movie drama "Amour" just got nominated for five Academy Awards (aka "Oscars").  And Nina and I spent new year's eve and the first days of 2013 in Paris, the world capital of love. 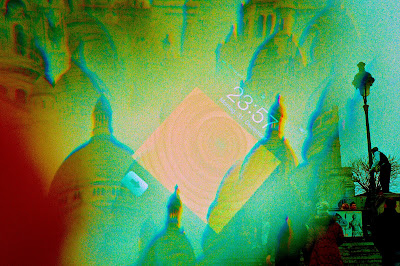 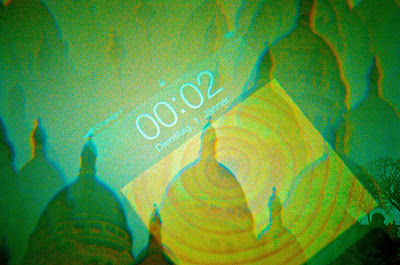 We spent the last minutes of the old and the first of the new Gregorian year in Montmartre close to Sacre Cœur.  That made sense insofar as our hotel was located nearby.  I made two closeups of my smart phone at the turn of the year.  A few days later we went to the biggest flea market in Paris, the Marché aux Puces de Saint-Ouen where we bought some geometrical objects made from glass for photographic experimentation.

Okay we went to certain places like Montmarte quite often in the course of that week.  But I must admit that it strikes me to see a picture taken on Tuesday January 1st, 2013 at 2 minutes past midnight coincidentally blend with a (multipe image) picture from exactly the same location, only that it was taken five days and some 250 photographs later.  Obviously, the very first of four cartridges I used in Paris ended up as the last one being double exposed. 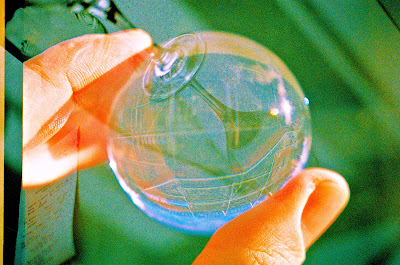 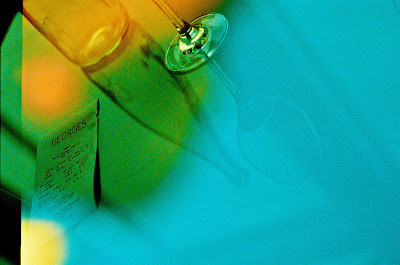 That very same thing happened also in relation to the Centre Georges Pompidou (which the French also like to call "La Raffinerie").  Photographed at the beginning of our vacation through a glass ball (which I had bought at yet another "biggest flea market", namely the Naschmarkt in Vienna one month earlier), that image blended with a still life I took a few days later in the "Le Georges" on the 6th floor of the Centre Pompidou building after visiting the Salvador Dali exhibition.

I messed up the picture following the "glass ball" image, as no image got superimposed with "Still Life #1".  Perhaps I mistakenly pressed the shutter button in a dark place, I don' t know.  What came out of that "mistake" however is a "Refined Refinery" image without a refined refinery...  I decided to call it "Still Life #1" because I expect more still lives to come in the future. 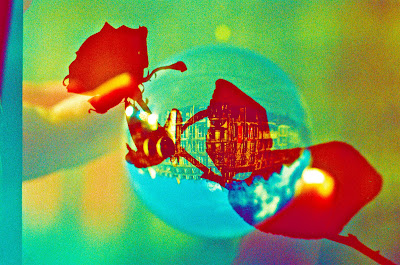 On the tables in the "Le Georges" they have artificial roses.  A picture of such a fake beauty superimposes the "glass ball" image which I took on Place Georges Pompidou just before taking the "Refined Refinery" picture. 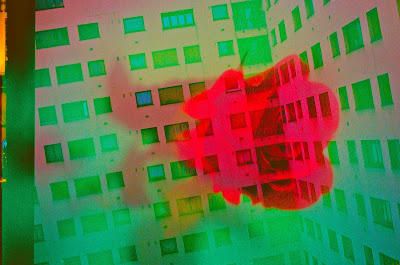 The artificial rose merges with the view from our hotel room and makes me think of that famous Édith Piaf song from 1945.  The lyrics were written by the singer herself and today it is hard to believe that Piaf's songwriting team did not think the song would be successful.  I would like to finish this post with my favorite words from this beautiful tune:

The other day while I looked at "Images Of The Subconscious" that I had not used for the blog yet I realised that there were some photographs that in one way or another made me think of love. 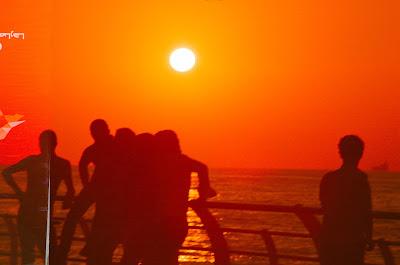 A slightly out-of-focus picture of young men on Corniche seafront in Beirut during a beautiful sunset in August 2012 blends on its left edge with part of an upside-down image of a poster (of Bashir Gemayel, who is not visible in this photo). 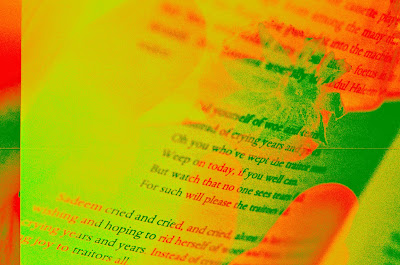 A strawberry in my hand gets superimosed by a page of the English version of Rajaa Alsanea's "Girls of Riyadh", a book which was banned in the Kingdom of Saudi Arabia (KSA) shortly after its release in 2005 due to its unadorned description of the (complicated) experiences of four young Saudi women with men in a conservative Islamic culture.  The short stories are written in the form of e-mails and are based on the lives of real people.  In my view the book makes for a very interesting read, especially if you (like me) have no clue of what life is like for women in KSA.  And in a way the book confirms my hope that the internet can be a tool for positive change in society.

On the page I used for the photograph, the author cites the lyrics of a song by Abdul Haleem, an Egyptian singer of the 1960s, which read as follows:

Rid yourself of woe and tears
Instead of crying years and years
Oh you who’ve wept the traitor man
Weep on today, if you well can.
But watch that no one sees tears fall
For such will please the traitors all. 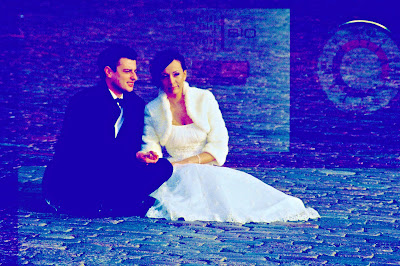 Could Love Be The Washing Machine Of Our Souls ?

An inviting public wedding photo session in the heart of Warsaw merges with a picture of an old washing machine exhibited in the Polish Museum of Technology ("Muzeum Techniki"). 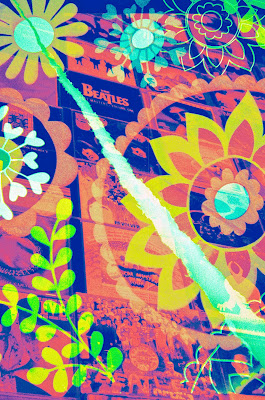 The beautiful paper in which "Girls of Riyadh" had been wrapped by the kind person who made me this original gift inspired me to a photo shoot.  The title of the resulting picture - a blend of the wrapping paper with some of my favourite CDs - came very naturally given the CD in the centre of the image: the Beatles' 1966 album "Revolver" which features a song of the same name as the photo title. 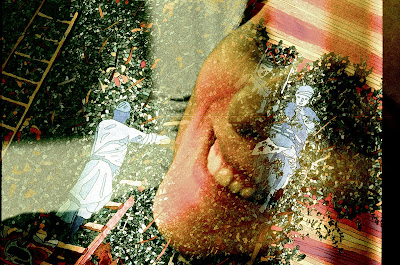 Tickled By The Unknown

A painting by an unknown artist from Palestine and a smiling Nina find their way into the same image.  It is hard for me to imagine that there is anyone out there who does not love to be happy as often and as long as possible.  By the way did you know that adults laugh 17 times a day on average whereas children laugh about 400 times a day? One evening I decided to take photos of two certain religious items which are to be found in Nina's and my living room: a hand-sized statue of a smiling Buddha and a cross that a relative of mine made from a piece of wood found in a coal mine in Apliki/Cyprus and which stems from a tree that existed at around 400 B.C..  Seeing those two spiritual pieces combined with the backs of Austrian soldiers got me thinking about the extremes that we encounter in this world:  life versus death, love versus hate, Republicans versus Democrats.  Or the time-freezing nature of photographs versus the aging and eventual “disappearance” of all things they portray...

...including religions and soldiers? 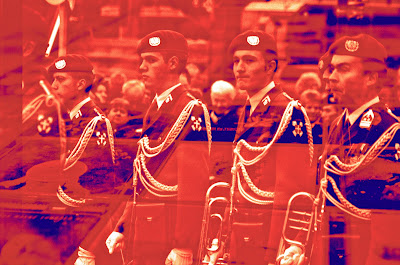 Yet another part of my CD collection merges with members of the "Guards Music Vienna".  I believe that music - like all art - ultimately is an expression of love.  But maybe I am turning a blind eye to a "dark side"?

Posted by Robert Marcus Klump at 12:02 PM No comments: